Both by George Lakoff and Mark Johnson 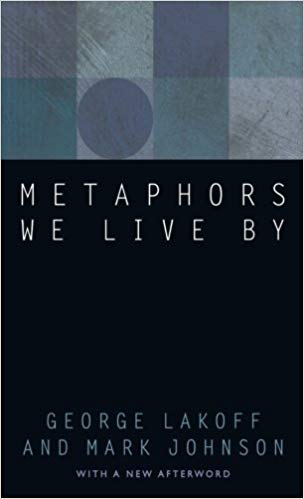 I've written enough on this blog about my experiences with metaphors. I've even written on this blog how these two books have influenced me. We're not going to rehash any of that.

Instead, I would like to write about how these works have been influencing me lately. Which is that I've been trying to think about metaphors more in terms of generalized equivalence and the history of generalized equivalence. This is influenced by me encountering sociologists that were talking about equivalence negotiations prior to Lakoff and Johnson's seminal works, and is best typified by this quote from Claude Lévi-Strauss.

The collective enterprise of science is always involved in a series of equivalence negotiations.1

Prior to encountering these works I understood that we, as humans, understand the new in the terms of the old, and I had discovered the work of the embodied cognitive linguists. I had also seen very vividly in the work on John von Neumann's, The Computer and the Brain the anthropomorphic beginnings of modern computing. But what I was missing was this whole other investigation into what I had been referring to as metaphor, and that social theorists in technology had been talking about as equivalence.

Let's take an example from biology to illustrate. I just finished reading, Coyote America: A Natural and Supernatural History by Dan Flores. Flores describes the first time westerners encountered coyotes and what they made of them. Some were convinced it was a jackal, like an African jackal. While others were convinced it was a type of fox or a type of wolf. Lewis and Clark called it a Prarie Wolf, and assumed it was just a smaller variety of wolf than what they were already accustomed to. They're all wrong. A coyote is a coyote, and both its behavior and physical biology is markedly different from jackals, wolves and foxes. But when we encounter the new we place it in the terms we are accustomed to. We understand the new and inexperienced in the terms of the old and previously experienced.

Wolves, coyotes, jackals, dingoes and dogs are all members of the genus Canis. This means that as far as scientific classification is concerned they're all somewhat related in the tree of life, but this has very little to do with how we actually think about them as humans. It's just a categorization and categories are applied to nature by people, they don't intrinsically represent anything in nature. They're man-made. Grass isn't green. We call it green because of the light it reflects into our eyes is registered in our brain as the color green. There is nothing essentially green about grass. When we encounter things that we have not yet categorized, or not yet internalized, we understand them through pre-existing categories.

As a technical writer for the Internet and software systems, and as someone who obsesses over language, this can sometimes drive me nuts. Computer scientists as a group are woe to admit when they foist language on readers hefted from the depths of adjacent and more established disciplines. They often get cranky when people don't perfectly mimic their historiographed etymology.

The typical process goes like this:
1. A new concept is envisioned and created.
2. The new concept requires a name.
3. A word is borrowed from some other discipline to name the concept.
4. The new concept becomes common and its name begins to be used more commonly.
5. The old meaning of the word is forgotten.
6. I see people on Twitter making fun of people not using the word in the new sense.
7. Facepalm.

Again let's look at an example. Crypto just meant hidden, surreptitious and kinda disingenuous up until 1980 or so. Crypto-nazi and crypto-commie were both in the American lexicon prior to computers entering common use. Check out the William F Buckley, Gore Vidal debate for one of its most famous uses. However, with this meaning both crypto-currency and cryptographic signing don't really make sense. When I sign a text file with my private key and you verify my cryptographic signature with your public key we are not engaging in anything crypto related. There is nothing hidden in the actual message. My private key is kept hidden because otherwise anyone can sign the message, but it's not included in the actual message. Also, TCP is not a substrate. I'm looking at you IETF crowd!

But enough ranting. The point again is that we understand the new in the terms of the old. I don't have a better prefix to suggest for the thing that Diffie and Helman and a lot of other smart people invented with really big numbers that allows us to sign messages. We'll just have to stick with crypto for now and the foreseeable future, and that's fine. Neither do I have good replacement for substrate. And plus, using substrate in this manner validates my hypothesis for the Master Orientation Metaphor for Computers and Software. Our language will continue to evolve as our needs for it change. The mutability of software artifacts will continue to give rise to many things which must be named leaving a slurry of new etymologies in its wake.

Lakoff and Johnson are less interested in fast paced evolution of language than I am. They're looking at this stuff with human evolution as their time scale. Metaphors We Live By was written in 1980 and followed up by Philosophy in the Flesh in 1999. They cover the same topic and they're written by the same authors, but where the former is a theoretical take on how language might work, the latter follows up with an empiracally based investigation into how language does work. Philosophy in the Flesh teases the reader with the beginnings of the biological groundings for how language works. Biological groundings that are still being investigated with new empirically based evidence appearing regularly. It's a great time to be interested in cognitive linguistics.

I had the privilege of attending George Lakoff's class on metaphor while I was studying at UC Berkeley, and so one might say I am very much an initiate of the cult of embodied cognitive linguistic studies. As I've recounted previously in these pages I got into metaphor because I had some questions about how to talk about computers, and why certain methods worked well while others didn't. I'm still revisiting the subject of metaphor and metonymy in my work and in my feeble attempts to understand human communication. And as the above rant about crypto and substrate illustrates, I expect to never stop revisiting these and related questions on metaphor.