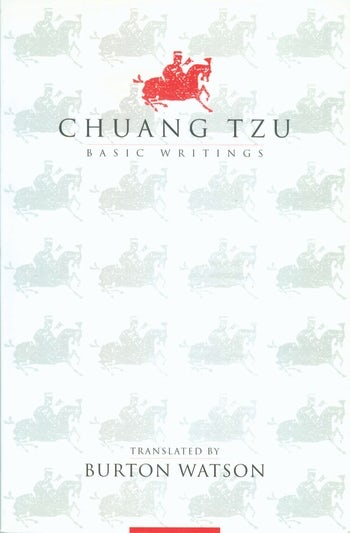 It has taken me a too long to write this final entry. I started this 10 books thing about 14 months ago and wanted to write an entry a month. Initially I wrote more than an entry a month, but then after #9 I totally slacked off and didn't write until now. What ended up motivating me to write this was two-fold. One, I wanted to finish this series so I can start writing about something else. And two, being stuck in quarantine and looking for a project.

This will be a short entry because the writings of Chuang-Tzu are short and he emphasized brevity and clarity. It's also going to be short because I haven't read Chuang-Tzu in a very long time. And while it remains the only book I have two different translations of and something I hold dear, it has been a while since I spent much time with it.

We don't know that much about Chuang-Tzu, and what we do know is really really old. He lived in eastern China sometime in the warring states period in the late 4th century BCE. He was a Daoist courtier in a state in eastern China. We don't know which one, but it was a time when Chinese lords kept court philosophers to both help them govern and as a form of competitive philosophy with other lords. Just as different Chinese states were competing militarily, politically and economically with one another, they were also employing philosophers to offer competitive visions of reality and how best to govern.

I'm not a scholar of religion, I'm not a Daoist, and I'm not an expert on Chinese history or Chinese religion. I'm just someone who is always looking for a better way. The way I like to approach Chuang-Tzu is to imagine that he drew upon an ancient Chinese reilgion(Daoism) and brought it into the contemporary philosophical competitions of his age alongside the likes of Confucianism, Moism and Legalism. He lived in a time of tremendous philosophical innovation. It was also a violent time with wars popping off frequently between states and alliances forming and disintegrating easily.

Before reading Chuang-Tzu I had of course read the Tao Te Ching. But the Tao Te Ching really failed to resonate with me. Perhaps because it was too short, or because many of the lines are just statements left hanging, without any explanation. They often feel hokey or even bullshitty. You can get through the thing in 30 minutes, and I never saw a reason to really spend any more time with it. For whatever reason it never resonated with me. So I was pleasantly surprised when I read Chuang-Tzu for the first time as an undergrad studying comparative religion. Things are explained more, it's actual prose, and while still somewhat mysterious at times most of that is just because it's old and many of the explanations have lost their relevancy.

Chuang-Tzu above all cares about clarity and the Way. Achieving clarity, following the Way, and developing a clear understanding of the human condition are his primary concerns. Reading it again for this post it felt fresh once again. In my work as a technical writer I struggle every day with clarity, and the implications of other people's writing not being clear. There's also a certain, sunlight is the best disinfectant, associated effect of clarity. In that, if someone is bullshitting you or intentionally obfuscating their communications with you the simple act of repeating what they're saying in clearer language often reveals their true intent. Clarity is something we have to work at and direct communication is a fallacy

Chaung-tzu doesn't pretend either that we can have an easy time of it. The Way is not something that we can just achieve through some magic, mystery or other easy shortcut. Instead, like a good Daoist Chuang-Tzu looks in common places for deep truths.

Cook Ting laid down his knife and replied, "What I care about is the Way, which goes beyond skill. When I first began cutting up oxen, all I could see was the ox itself. After three years I no longer saw the whole ox. And now -- now I go at it with spirit and don't look with my eyes. Perception and understanding have come to a stop and spirit moves where it wants. I go along with the natural makeup, strike in the big hollows, guide the knife through the big openings, and follow things as they are. So I never touch the smallest ligament or tendon, much less a main joint.

A good cook changes his knife once a year -- because he cuts. A mediocre cook changes his knife once a month -- because he hacks. I've had this knife of mine for nineteen years and I've cut up thousands of oxen with it, and yet the blade is as good as though it had just come from the grindstone. There are spaces between the joints, and the blade of the knife has really no thickness. If you insert what has no thickness into such spaces, then there is plenty of room -- more than enough for the blade to play about in. That's why after nineteen years the blade of my knife is still as good as when it first came to the grindstone.

That's all that needs to be said on this subject. Another lesson I learned from reading Chuang-Tzu is that brevity is the best way for an author to show respect to their readers.