Use of Weapons, by Iain M Banks

The Devil's Chessboard: Allen Dulles, the CIA, and the Rise of America's Secret Government, by David Talbot 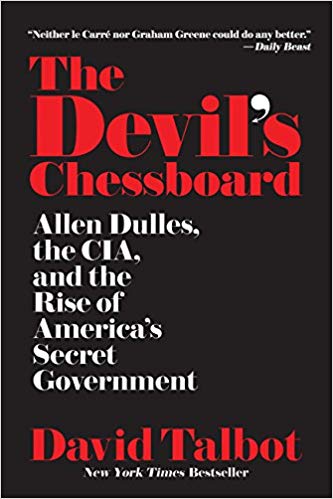 Our next pairing features a work of fiction and a biography.

Use of Weapons is set in Banks' Culture universe and features a protagonist hired by The Culture to do things their advanced civilization needs doing, but is either too skittish or unknowledgable to do themselves. The Culture is a post-scarcity civilization of space faring transhumanists and other races where the citizenry is libertine, classless and thinks everyone should behave like The Culture. Banks gives us in The Culture a reflection of ourselves without material or puritanical restraint. A Fully Automated Luxury Gay Space Communism of the future where everyone can devote their lives to whatever they find fulfilling. Of course, some members of The Culture fulfill themselves by uplifting other civilizations around the galaxy and for that they often require unrefined beings not of The Culture. This is our protagonist, a maker of war and a user of weapons.

The minds of the culture, both machine and flesh, cast about looking for those civilizations not on the trajectory of peace, propsperity, advanced technology and limitless energy. A special group with The Culture called Special Circumstances then calculates what these civilizations need to prevent falling into cataclysmic dystopia. Sometimes it's a great new leader, sometimes it's a war, sometimes it's a new religion, etc. They then deploy their limitless resources and their man, our protagonist, to use weapons to bring about peace and prosperity. Sometimes playing our protagonist for a pawn and counting on his failure, other times giving him everything he needs to succeed, but usually calculating correctly and bringing about the change they've envisioned. The members of Special Circumstances tasked with carrying out the calculated atrocities of The Culture are not members of The Culture themselves. Instead they're typically groomed and pulled from more 'barbaric' societies and worlds where the beings are more capable of violence and more comfortable with it. The Culture are humanitarians with atomic weaponry and faster-than-light travel. Capable of anything, but uncomfortable doing it themselves because they might experience a terrifying thought or miss one of their orgies.

These deployments take their toll on our protagonist who never feels quite at home in The Culture, but loves the immortality it brings him and the bargains he can make with The Culture to settle old scores.

Use of Weapons is about interventionism on a galactic scale. Banks gives us the perfect society in The Culture, but even they can't stop messing with a good thing in the name of perfection. They must spread their model of morality to the galaxy and prevent the people of lesser civilizations from harming themselves or others. Their technology and their creepily accurate predictions of how these lesser civilizations will develop through their interventions are like their garden, which they tend with precisely calculated violence. They're not Gods, but they're damn close to Gods.

I've paired this work of science fiction with a biography of one of the 20th century's most deceptive human beings, Allen Dulles. Dulles was the head of the Office of Strategic Services in Europe during World War II and the first director of the Central Intelligence Agency.

The Devil's Chessboard: Allen Dulles, the CIA, and the Rise of America's Secret Government starts off in Bern Switzerland in 1940 where Dulles has sequestered himself to at once be close to the action unfolding in Europe, while also remaining quite distant from anyone in the Roosevelt administration. It then follows Dulles and a nascent CIA through its early years of coup hatching, disinformation, and assassination for before ending with Dulles' death in 1969. The book is well sourced and Talbot has done a good job of dealing with the archival material. I did feel his personal opinion sometimes seeped through somewhat uncomfortably. For example, it's clear Talbot believes Dulles was behind JFK's assassination and he presents evidence to this affect. He doesn't come out and say this, but the reader can tell it's what he believes. Maybe Dulles was behind JFK's assassination, but the evidence presented in the book is certainly not conclusive enough for such a definitive opinion.

The specific misdeeds of Dulles during the war and after it as the Cold War developed are best left to the book. There really are too many to recount and the complexities of the different operations, including what to believe and what not to believe, are far outside the scope of this post. If you're interested in a full accounting of the CIA's actions throughout the Cold War this is a good start, but it's just a start.1 Dulles worked to fight real or imaginary Communist threats, which in his mind could mean anyone who didn't agree with him. It's difficult to know exactly why he and the other early CIA recruits did the things they did. The most often heard refrain would be COMMUNISM, but reality is more complicated than that. Often their reasoning was simple self-interest, other times it was to promote the plundering of a foreign land by American industry, to protect their friends in high places, or simply to protect their beloved agency. It was rarely in the interests of the American public. Thus we contrast a book about interventions by technocratic space demi-Gods with a biography of an actual interventionist. One explores the problems of deploying moralistic purity through unassailable violence, while the other recounts the often failed tribulations of neo-colonial brigands.

Maybe Banks is providing us with a commentary on western interventionism in post-colonial societies, but the similarities are striking and given Banks' politics it would not be surprising. Banks' protagonist in The Use of Weapons dispenses money and backs groups The Culture wants to succeeed in much the same way the CIA did in the third world throughout the Cold War. The intentions are different because The Culture truly does want to bring about a better galaxy instead of establishing systematic exploitation, but maybe that doesn't matter and maybe that's the point Banks is trying to make. That regardless of the intentions of the interventionist, or those who pay them, there will be unwelcome side effects. That even super advanced trans-humanists bent on galactic peace, love, and Fully Automated Luxury Gay Space Communism screw up sometimes and make things worse.

One point that Banks does make, and that also comes repeats in the history of the CIA and Dulles, is that proxies don't always do what you want. The Culture is pretty good at picking the right proxies, but even they screw up sometimes. Not every action of a proxy can be predicted. Proxies have their own interests and objectives that will typically trump those of their first world backers. Assuming the leadership of the CIA cares about 'Blowback' they have a pretty terrible record at picking proxies. The most obvious example being their backing of the Mujahadeen during the Soviet War in Afghanistan and its development into modern Islamic terrorism. There are plenty more.

However, it's not always clear if CIA leadership actually cares or if they're even cognizant and mindful of how their actions might lead to 'Blowback'. When Dulles decides to help ex-Nazis such as Klaus Barbie evade trial at Nuremberg, then either sets them up as intelligence assets or helps them escape to South America, there's no recognition of the consequences of their actions. Like we've already discussed, it's really hard to know why Dulles, the OSS or the CIA did what they did. It's difficult to determine their motivations, either because we're missing information or because they never divulged it to anyone. At least The Culture has a cold and calculating moral compass, where as American Cold War intelligence comes across as nothing but capricious and arbitrary. Sometimes driven by the ideologies or petty whims of single men, and sometimes driven by that strange beast called bureaucracy. Itself an unknowable mixture of career mindedness, paper shuffling, cataloging and distant orders.2

There is a complementary use of psychology throughout both works. They both have interesting things to say about the use of psychology, psychological torture, and its use as a weapon. Without revealing too much of a spoiler, our protaganist in 'Use of Weapons' is an adept despenser of pain through psycological abuse and torture, and that's all I'm going to say on that. Go read the book if you want more.

In The Devil's Chessboard , having sequestered himself in Bern at the beginning of the war, Dulles finds himself living very close to Carl Jung. His wife attends therapy sessions from Jung while they live there, and one of his daugthers ends up becoming a practicing Jungian psychologist. Dulles' and many at the early CIA were strong believers in the efficacy of psychology as an all powerful tool of manipulation. There's much evidence to suggest that many Western elites of the early twentieth century embued psychology with almost magical powers. We've since tempered our understandings of what is possible through things like mass psychological manipulation, hypnosis, suggestion theory, Manchurian candidates, etc. But at the time psychology was viewed by many as possibly containing magical keys to the mind, worthy of at least serious investigation. Given that we've recently learned of how the CIA is again testing its magical truth serum potions on prisoners perhaps this legacy of belief still persists. Maybe truth is stranger than fiction.