The Great Transformation: The Political and Economic Origins of Our Time, by Karl Polanyi 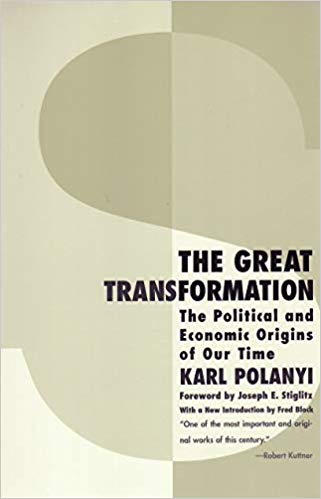 I like reading economic histories and this book is the best economic history I've ever read. I'm not alone in this opinion, The Great Transformation is widely recognized as one of the best works on the Industrial Revolution and the rise of capitalism in general. It's just a damn good book. Every chapter makes sense in its own right and can stand on its own. It's not a long book, is incredibly accessible, uses little specific lingo from a discipline that loves inventing terminology, and is a very pleasant read. Yet it conveys Polanyi's opinion clearly, is properly sourced and informs the reader thoroughly. It's not an introduction to the Industrial Revolution and readers will require some background in the subject in order to feel comfortable with it. It's also not without what I think is a giant blindspot, which I will now go into.

The first chapter of The Great Transformation is entitled The Hundred Years' Peace. When I read this I was familiar with this term and its roots in European early 20th century discourse, and it has never really set well with me. Polanyi makes an argument that the 100 year period between Napolean's final defeat and World War I was a period of economic and cultural prosperity largely because the great powers of Europe balanced each other out thereby averting massive bloodshed on the European continent. There is some truth to this argument and Europe was largely at peace during the 19th century, but let's talk about colonialism. Because there's scant mention of it in this chapter. Maybe the word appears in it somewhere, but I couldn't find it.

There's words towards the end of the chapter on European powers making bargains over slices of Africa, and there is a brief mention of, "The epic of the building of railways in the Balkans, in Anatolia, Syria, Persia, Egypt, Morocco, and China is a story of endurance and breathtaking turns reminiscent of a similar feat on the North American Continent." I'm not so sure the people living in those countries would be so triumphalist in their appraisal.

Polanyi focuses most of his attention on economic interplay between European great powers, and on the internal economics of Great Britain, without spending enough time on the impact of colonialist economics on Great Britain or other European powers. I'm not a huge fan of Karl Marx, I know it may not appear that way, but while he has great insights his obtuse writing style drives me bonkers. However, Marx does an excellent job while writing for the New York Tribune in the 1850's on the economic impact to European great powers from their colonial subject states. A topic not really given proper attention again until Gandhi's famous visit to Manchester textile mills.

Marx pokes at questions like; why does Great Britain want to go to war with China over the opium trade, why is Britain intentionally starving millions of people in Ireland and India, and why are the Americans about to have a war over slavery? These are economic questions as much as they are about politics and imperialism, and Marx is better than Polanyi at integrating the economic and imperialist narratives.

To call the 19th century The Hundred Years' Peace, or even The Hundred Years' European Peace is an insult to the millions that died by European hands over the course of it. The 19th century was incredibly bloody, and it was primarily Europeans spilling the blood. Not that I expect Polanyi to pay homage to those killed by Europeans or apologize or anything like that. I'm just bothered by these peoples and their economic contributions being largely absent from his analysis. The economic implications of plundering half of the world and sending that loot to Europe are largely missing from his analysis. Polanyi quotes Marx throughout The Great Transformation and he's an economist, so it's not as if he wasn't aware of Marx's work on this subject. I think Polanyi is writing in an environment where the term "The Century of Peace" is accepted wisdom, and my 21st century brain has a hard time accepting that.

This is my main criticism of The Great Transformation. I'm sure there are others and I haven't read them, but this one is mine. The rest of the book and most of the arguments it makes are absolutely gold. And by gold I mean the gold standard, because much of the rest of Polanyi's analysis rests upon the collapse of it. I also love his long-winded refutation of Adam Smith's assertion that since time immemorial man has been driven to "truck and to trade", or how the Industrial Revolution created the social sciences. There are too many amazing insights in The Great Transformation for this short blog article to give them justice, which is why the book comes in at #3 on this list.