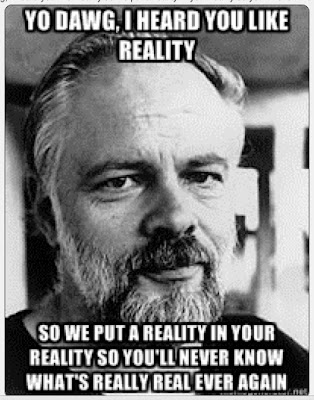 Our next entry isn't a book and it isn't a book pairing either. It's an author, Philip K. Dick (PKD). It's difficult to determine which book of Dick's impressed on me the most, so this post is about the author and not any specific book of his.

PKD's consistent theme is of characters who learn that things are not as they seem, or begin to question that reality may be more fluid than they were previously comfortable with. His early work in the 1950's approaches this question using the common tropes of mid-century American sci-fi with roots in mystery novels. A time and setting are described to the reader, usually in the future. A mystery is presented. And finally a plot twist at the end reveals that things are not as they seem. A good example of this is Second Variety, written in 1953. Dick presents us with a dystopian future that would be later refined with James Cameron's The Terminator.1 Humans created robots to kill their enemies, then the robots grew sentient and decided to kill all the humans. Only as oppoosed to The Terminator, in Second Variety there's no time travel and the robots win. At one point our protagonist has to decide whether a humanoid is a robot or human. He's sure of himself, but he incorrectly kills the human mistaking it for a robot and the robots win. Pretty standard plot twist, although somewhat racey for 1950's sci-fi due to its depressing ending. Everyone dies.

Contrast this with A Maze of Death, written in 1970. In A Maze of Death a group of planetary colonists are being chased and killed one by one through a mysterious force. In the end they discover they're actually pschyatric patients being kept alive in stasis aboard a dying ship. The mysterious force killing them is, in short, their psychiatric treatment. Instead of dying they are being held in a form of stasis to keep from dying in real life. Or are they ..? The work captures what attracts me so much about PKD's work. His characters always begin relatively comfortable in their knowledge of reality, but in the end their reality is malleable and never quite certain. Neither the characters, nor the reader knows exactly what the state of things is or which truth to believe.

There's this silly argument about whether or not George Orwell's 1984, or Aldous Huxley's Brave New World best represents our contemporary dystopian surveillance state. It's a fun argument often exercised in jest that I've played a part in many times. Like much of American discourse about privacy it roughly tracks to either a fear of government or a fear of corporations. Most Americans who argue that 1984 best represents our privacy dystopia fear governmental power more than corporate power, and most Americans who fear corporate or capitalist power more than governmental power argue that Brave New World provides better representation. It's a silly argument if you consider it deeply, but so is any fictional narrative held up as a surrogate for actual analysis. It's important because the stories we tell ourselves shape our understanding of our present circumstances, so knowing which book a majority of people believe best represents our current state can tell us how those same people are interpreting our current state.

I've always argued for PKD in these discussions. Partly because I have a hard time distinguishing between private and governmental power, but mainly because I believe PKD uncovers something about our endlessly mutable circumstances that I believe Orwell and Huxley missed. They came earlier, so they're forgiven, but they also just weren't as good of writers. PKD brought mystery fiction into the digital age precisely because PKD's creations are as easily mutable as digital artifacts are. He beat everyone else to this by writing about it in the 1960's.

Computers are machines that manipulate symbols and as we become more dependent on them it's become apparent that their mutability represents both an amazing opportunity for rapid symbol manipulation and a loss of information provenance. With a digital artifact we can never be sure if it has changed, or when it might have changed. We can keep logs, but as long as those logs are also digital we're just extending the problem. As the artifacts of our daily lives are increasingly digital and less captured in physical immutable forms, and as we grow more dependent on these artifacts, we increasingly find ourselves in circumstances that would have been familiar to PKD. Certainty becomes more illusive and conclusions harder to ascertain. There's an entire sub-discipline of computer science concerned with attributing who did a thing on the Internet that our society still hasn't really caught up to. As a society we've simply not advanced to the level of doubt necessary to interpret information gleaned from endlessly mutable forms.

Propaganda, or what modernity has termed fake news, thrives in this environment. Knowing not what is the true reality, and possibly being lied to on a quite regular basis, we seek out narratives that seem familiar to us, that perhaps provide some comfort, or attend to some fear that we're not ourselves entirely conscious of. We are primed and we are receptive to being lied to.

Attribution of crimes is difficult if not impossible, but we crave heroes and villains. Without physical evidence, we're left guessing as to culprits. It is then the job of the propagandist to convince us of the culprit. Was it really a Communist that burned down the Reichstag in 1933? Did the Russians really hack the 2016 election? Who cares. What matters is what we believe and how that belief can be manipulated by propagandists to get us to demand action. What matters is the story we believe we came up with ourselves.

The term woke has developed an interesting meaning in the last few years. If one is woke one understands that they're being lied to, that propaganda has shaped their views and they must wake up as if from a dream, to grasp the true reality that was obscured from view prior to them becoming woke. PKD would have understood this term and its implications implicitly, bacause all of his characters go through a process of waking. However, like Chuang-Tzu's dream of being a butterfly we can never know if our true form is that of a man or a butterfly. Is a person who is woke truly waking, or are they going to sleep? Indeed one way to appreciate PKD is as training for the waking world. PKD trains us to live as the skeptical epistomologists that modernity requires, inoculating us against effortless belief.

PKD was incredibly prolific and influenced science fiction, and fiction in general, in ways that I still find myself discovering. I believe he is the most important science fiction writer of the 20th century. You have felt his influence even if you don't know it because so many other writers have been influenced by him.

I have a hard time differentiating much of PKD's works. They all run together in my mind and my memory plays tricks with me. I imagine one story's protagonist experiencing another story's plot, or my memory manifests a concept from one of his books in the wrong setting. I like this about PKD's influence on me, because it reminds me to doubt my own memory, to doubt my own understanding. I'm fallible. I can believe things that aren't true and I can be tricked. My reality is mutable. This is the most important lesson we get from PKD, and that's why he remains one of the most important authors of our time.