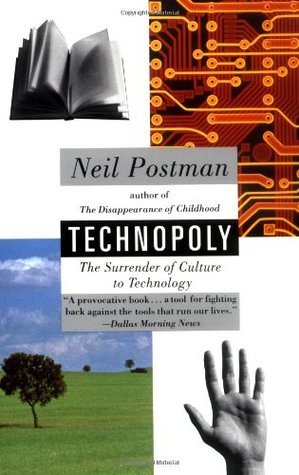 It's probably a bit odd for someone whose life revolves around computers as much as mine does that none of the books on this list so far have been computer books. This is not to say I have not read any good computer books. Some that stand out are Structured Computer Organization by Andrew Tannenbaum, The C Programming Language by Kernigan and Ritchie, Patterns of Software by Richard Gabriel, On the Origin of Objects by Brian Cantwell Smith, and Coders at Work by Peter Siebel.

But none of these books, with maybe the exception of Patterns of Software or On the Origin of Objects, is about what computers are and what they do. Most of the books I've read about computers are about how to make stuff with them. They're guides for doing stuff with computers; How To books, manuals, and textbooks. And while there is definitely a place for these kinds of books on my reading list, they're not the kind of books that should be on this list. This is a list of books that influenced me in how I think, and for a book to make this list it needs to do more than just show me how to make things.

Technopoly by Neil Postman is a book about technology, primarily computers and telecommunications, and its mostly pernicious effects on contemporary society. I read it first sometime in the late 1990's, once again in the early 2000's and again before writing this piece. I don't think it was the first book to introduce me to thinking about technology and society in general, it is one of the first I remember, and importantly it is one of the first I remember being overtly critical of technology at a time when not many people in the popular American zeitgeist were. In high school I discovered tech utopians like Kevin Kelly and R.U. Sirius. I think at the time I was just interested in reading things that talked about how computers were changing society, or maybe I was just more of an optimist then. It really wasn't until I discovered The Medium is the Message by Marshall McLuhan and Technopoly by Postman, both as an undergrad, that I started reading people that were critical of technology and the changes computers were bringing to society.

Postman's take on technology is rooted in his understanding of Greek philosophy, the history of rhetoric, and the history of media. I'm not sure if he expliticly calls out John Dewey in the book, but one can definitely hear the echoes of John Dewey in everything Postman writes. Like Dewey, Postman believes that American society requires an educated polity in order for it to function democratically. And also like Dewey, he believes a public education system forms the bedrock of an educated polity and robust civil society institutions. Postman is also an unabashed believer in American exceptionalism, and it was only on reading the book for a third time that this specific foundational stone of his argument really bothered me. Maybe when I was younger I believed more in American exceptionalism, or maybe it just didn't bother me as much, but at this point in my life I find it hard to distinguish it from chauvanistic nationalism. Thus, mainly because of this discovery upon my third reading did I reconsider the book appearing on this list at all. However, given that I've read the book three times and because the first and second times I read it I was profoundly influenced by it, Technopoly makes the list at number nine.

The one example he gives that sticks with me is of a doctor who is forced to make a decision regarding a patient's life. The doctor recommends, based on the doctor's experience and education, that the patient undergo procedure X. However, there is a machine setup to capture and quantify the state of the patient. Maybe it's taking a blood pressure reading, or measuring heart rate, or temperature. And because of this the generally accepted procedure is Y. If the doctor proscribes X and the patient dies or suffers complications, then the doctor will be in trouble. However, if the doctor proscribes Y and complications arise the doctor will be able to point to the readings of the various instruments in order to defend themselves.

Postman's concern is that the experience and intellectual expertise of the doctor are supplanted by quantitative measurements. We have removed the human from the decision making loop, and not just with quantifying measurement machines. He also goes after management practices, because "What can be measured, can be managed." (Lord Byron) Postman knows his history of organization and management practices and he deploys it to convince the reader that; what can be measured should not necessarily always be managed.

He's not wrong. Computers afford the easy measurement and quantification of qualities. They square circles and digitize analog signals; no matter how many features you add to your machine learning algorithm you're still going to occasionally miscategorize. Better fidelity and better precision don't fix this mess. Partly because reality changes faster than programmers and algorithms can keep up with, but even if reality were static, mapping the discrete qualities of machines to the messy qualities of reality is, well, messy.

His other complaint is we don't notice this change occurring to our society because new technologies alter the way we engage in discourse. The Medium is the Message and all that. Humans need to be in the decision making loop, but more importantly we need to communicate unmediated by complex digital artifacts. Or at the very least slow down the deployment of new technologies until our culture is prepared for them.

Postman also argues that technology alters the symbols we use to communicate, and while I agree with him on this, upon my third reading I don't think he had the knowledge to properly explore this subject. He references Walter Ong, which is a good place to start, but he doesn't understand how humans make meaning. I'm a dyed in the wool believer in embodied cognition, just look at #1 in this list. But Postman doesn't even reference people I don't like hearing talk about cognitive linguistics, like Chomsky or Pinker. Postman doesn't grok how humans make meaning or the key differences between how computer scientists use the word semantics vs how linguists use it. He doesn't grapple with how technology alters the mapping between language and reality. Computers are just machines that manipulate symbols. To not bring that point up and poke at it while you're discussing how technologies change symbols is a gigantic missed opportunity.

In the end he makes a good call for education to be rooted in history and historical understandings of change. I agree. History gets short shrift in modern education and this negatively affects achieving democratic pro-social outcomes. Education in general, not just American education, is much too focused on landing people jobs. I understand why that is the case and understand that in a competitive labour marketplace kids need skills that look good on a resume, but it undermines everything that Dewey argued was the cornerstone of American democracy. It makes us slaves to the capitalists and all that, so I agree with Postman's conclusions.

Technopoly was written in 1993, and at a time when few others were writing critically about the impacts of computer technology on society. The Internet was just taking off in the American public imagination, and there wasn't much appetite for some crank like Postman to come and critique it. Luckily at this point in his career he had already published Amusing Ourselves to Death and was already somewhat famous.

We're at a different time now in terms of how most people view technology. The public is more willing and appreciative of critical takes on technology. Gone are the days of tech utopians writing libertarian screeds paying backhanded glory to Ayne Rand and Robert Heinlein. RIGHT! Well not really. They're still around and they're still getting published. But there is a different discourse around technology today than there was in 1993. Critically examining technology and its impact on society has a place now in the public discourse. A place that it really didn't have in 1993. If Postman were alive today I'm sure he would still not find the public critical enough about technology, and I would still probably agree with him.